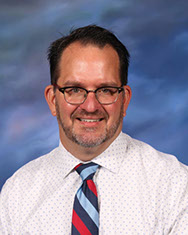 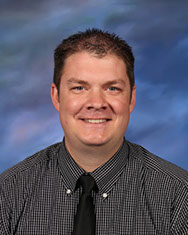 Pastor Wierschke joined the pastoral staff of Trinity Lutheran Church in August 1997 after serving a dual parish for six years in Michigan’s Upper Peninsula. Pastor Wierschke, his wife Lisa and their three girls have enjoyed calling Caledonia home. And my how time flies! When the Wierschkes arrived in Caledonia their oldest daughter enrolled in Trinity’s kindergarten; in July 2015 her wedding was celebrated at Trinity; their second daughter was married in June 2019; and their youngest daughter is now attending UW-Madison.

The Wierschkes have found living in Caledonia (they live in the north parsonage on the church grounds) a delightful balance between country and city. They enjoy the outdoors and gardening (raspberries and perennials are favorites) and with easy access to the city, Pastor Wierschke’s wife Lisa works as an interior designer from a store in Brown Deer.

The greatest blessing the Wierschke Family has enjoyed however is benefiting along with all the members of our Trinity Church Family from the ministry of Trinity Lutheran Church and School. This is a ministry that by Sharing Christ grounds us firmly in the love and grace of our Lord and Savior. Pastor Wierschke is appreciative and thankful for the opportunity to serve and to continue to build upon Trinity’s 150+ year ministry of Christian elementary education, as well as Trinity’s rich and varied musical traditions in worship. Through message and music the ministry of Trinity Lutheran Church and School proclaims: we will tell the next generation the praiseworthy deeds of the LORD, His power, and the wonders He has done (Psalm 78:4).

Pastor Schmidt is new to the Trinity family. He became a part of the pastoral staff in August 2017, after serving a multi-site congregation in Mauston and Adams-Friendship, WI, for 5 years. Pastor and his wife, Angie, moved here with their four daughters. Their dog, Goosey, is staying in Adams-Friendship until they’re able to move her down here, too.

As part of his studies at the Seminary, Pastor served as a vicar in Brookings, SD, at Our Savior Lutheran Church. When Pastor graduated from the Seminary in 2012, he was assigned to serve at St. Paul’s in Mauston and Adams-Friendship, WI, mainly serving at the congregation’s mission site in Adams-Friendship. Pastor Schmidt later accepted the call to serve as an associate pastor at Trinity, partnering in the pastoral ministry with Pastor Wierschke.

Pastor and Angie enjoy their new home in the Caledonia area, exploring the many beautiful things that this area has to offer. While Pastor stays busy at Trinity, Angie is busy teaching Kindergarten in the Racine Unified school district.

Pastor Schmidt and Angie are both excited to be a part of the Trinity family. They are eager to grow in faith together with all the brothers and sisters here and to enjoy all the blessings that God is showering upon the work at Trinity. They are also excited for their children to be a part of the Trinity family, as they grow in their faith and knowledge of Jesus at the school. “But grow in the grace and knowledge of our Lord and Savior Jesus Christ. To him be glory both now and forever! Amen” (II Pet. 3:18).